This is the first installment in a series of posts regarding modifications to BloodHound and lessons learned while working with Neo4j & Cypher. Other posts can be found here:

If you’re new to BloodHound, I highly recommend checking out this blog, this video, or this wiki to familiarize yourself. The work being done by _wald0, CptJesus, and harmj0y is changing how red and blue teams approach risk in Active Directory environments.

This post will cover how I’ve adapted BloodHound to enhance my workflow during a penetration test, complete with example usage and a source code release. It’s a bit verbose – I wanted to include why I saw an opportunity for these changes and the process for creating them. If you’d like to skip to the new features then start here.

Out of the box, BloodHound works like a champ. The interface is slick, the install is painless enough considering the dependencies, and the pre-built analytics deliver actionable intelligence. What’s important to note though is that BloodHound isn’t necessarily just a tool, it’s a platform for users to build on. The foundational elements – a reliable backend, a means for ingesting, querying, and displaying data – are already taken care of. The piping is in place for users to extend the already-great features and tailor it to their specific job function or workflow.

My workflow stems from being a penetration tester. The value derived from BloodHound on an engagement for me is obvious – I can quickly identify those complex attack paths that otherwise would have taken OVER 9000 BILLABLE HOURS to discover. Not only that, BloodHound serves as a tremendous debriefing aide when walking a client through your critical path to compromise (Seriously, clients love it. It’s interactive, it gives a tangible view of the network to less technical people, and it’s not Powerpoint.)

Whenever I obtain a new account or pop a shell on an engagement, one of the first things I do is run over to BloodHound and fire up the Pathfinding feature. I input the User’s/Computer’s name as my source and select Domain Admins as my target. The query only returns data when a path exists – awesome when it happens, but disappointing when it comes back empty. This process is a little tedious, and it lacks showing me the true privilege gains that come along with obtaining a new account/computer. This looked like an opportunity to add in a feature that could make my life easier as a penetration tester.

As I contemplated how to add this functionality into BloodHound, I thought more about my workflow and how compromises often unfold. Privilege gains during a penetration test usually happen in waves. For example, an assessment might start out like:

Obviously this process varies depending upon the environment, but the framework holds. We start with no credentials, and gradually our sphere of compromise increases as we control more assets.

Let’s use BloodHound to answer a simple question: When a new set of nodes are owned by some method, what other nodes can we now collaterally reach? Let’s call this our wave of compromise. Maybe one of the nodes in that wave has a path to Domain Admins that isn’t yet represented by a BloodHound relationship.

We’ll leverage this notion, that a node can be “owned” during a “wave” of compromise, to build some useful features.

Going deeper means understanding a little bit about Neo4j and it’s query language, Cypher. I highly recommend reading Rohan Vazarkar’s Intro to Cypher blog post, as I’ll skip over some of the introductory concepts. Rohan covers BloodHound’s current node and relationship structure, as well as some of the core analytics currently packed into BloodHound.

In it’s current version, BloodHound stores one property for each node: name. Depending on the type of node, this will be one of:

These properties can be added to a specified node using Cypher. The two simplest options for issuing ad-hoc Cypher queries are BloodHound’s Raw Query feature (at the bottom of the app), and Neo4j’s web browser (http://localhost:7474/). I recommend using Neo4j’s web browser to tinker with queries since you get some nifty syntax highlighting and debugging tools. Here’s the Cypher syntax for adding the properties to a specified node:

Now a query for [email protected] reflects the added properties:

By making a few additions to the source, we can even integrate these properties into the Node Info tab of BloodHound’s UI: 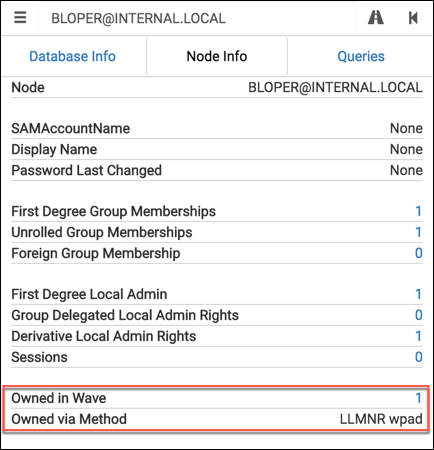 It’s a useful way to document your compromise as you go, and a convenient visual aide when explaining your critical path of compromise to a client.

Note that modifications to the UI like this are only possible if you tweak BloodHound’s source. I’m compiling all of my UI enhancements into a GitHub repo – if you want to try out these additions yourself then you’ll need to install the customized app from the repo.

For those interested, here’s a sample of the changes made to src/components/SearchContainer/Tabs/UserNodeData.jsx to make this happen (diff here):

Finding the Collateral Spread When a Node is Compromised

When we designate a node as owned, we want to see the ripple effect across the network. With our wave property set, we can find those outbound paths like this:

This is similar to the “Find Shortest Paths to Here” idea, but we’re now interested in the paths branching out of a node instead of those coming in. For each new node in the paths we find, we’ll set the wave property equal to the same wave value of the source node(s).

With these two nodes as our source, let’s use BloodHound’s Raw Query feature to find the other nodes collaterally included in this wave of compromise: 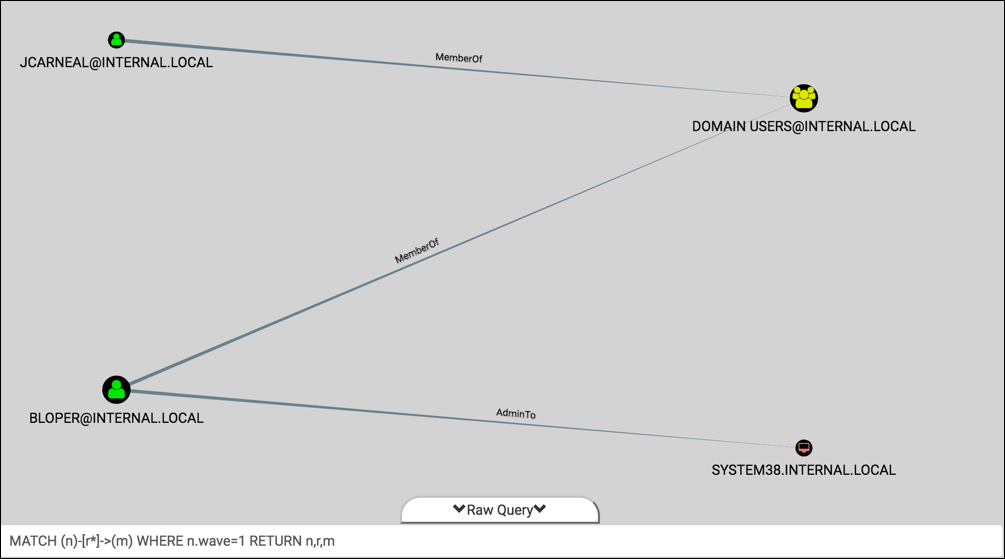 We see two additions – both users are a MemberOf “DOMAIN [email protected]”, and one user is AdminTo “SYSTEM38.INTERNAL.LOCAL”. Neat. Go ahead and add both of those nodes to wave 1 as well:

We have a way for marking nodes as owned, and we can view the ripple effect of a wave. What happens when we compromise a disjoint set of nodes via some new method? What does the delta in our access look like? It would be terrific if we could see what’s available to us now that wasn’t available to us before.

We can use the same queries as before, but we’ll want to be careful not to overwrite data from previous waves. How do we know which nodes we compromised in previous waves? Each compromised node has a wave property that already exists. If we detect that this property exists, then we know not to include it in the new wave. This can be done in Cypher by negating the EXISTS function:

We’re still looking for the paths branching out (except using the second wave as our starting point), but we don’t want to circle back to nodes we’ve already compromised. The clause AND not(EXISTS(m.wave)) ensures we don’t include any destination nodes with the wave property set.

Let’s see it in context by building off of the previous example. Imagine that the next step of our penetration test involved a password spraying attack against domain users. We found two users with “Spring2017!” on the INTERNAL.LOCAL domain, ZDEVENS and BPICKEREL. Start by marking these two new nodes as owned in wave 2:

Find the spread of compromise, then add those nodes to our second wave:

And now the graph showing the second wave. This represents the delta after our password spraying attack: 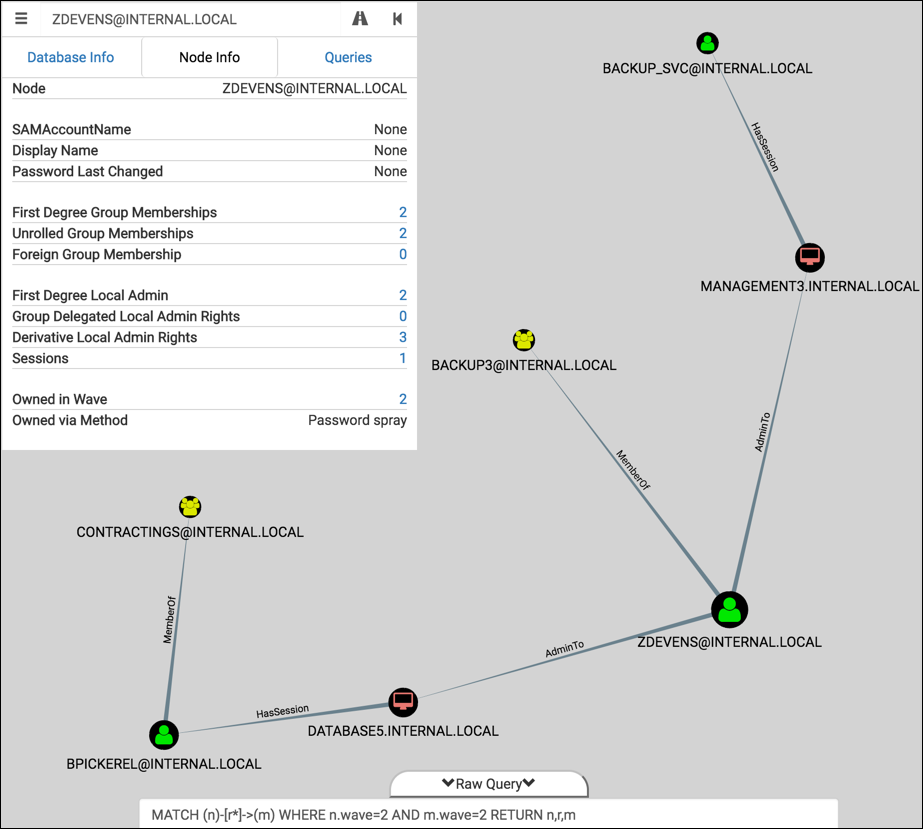 It’s tedious to manually run these queries each time a node is compromised. Thankfully, Neo4j’s REST API makes automation possible. With a simple Ruby script, we can leverage the same endpoint used by Export-BloodHoundData to ingest data directly across the network:

I usually start by dumping all of the nodes from the database with -n:

With -e, you can see some of the useful Cypher queries used throughout this blog post (some are slightly modified to improve query performance):

Continuing with our theoretical penetration test, let’s say that we found a juicy Excel spreadsheet which contained credentials for users [email protected] and [email protected] We’ll first create a CSV with the node names and method of compromise like so:

Then we use the -a flag to ingest:

The script will first query the database and determine the latest wave added – in this case it was ‘2’. It then increments it by one so that the incoming additions will be in wave ‘3’. You can override this behavior by setting the -w flag to the preferred wave value.

Once the wave number is determined, the script takes the following steps:

Let’s look at the result for this third wave in BloodHound: 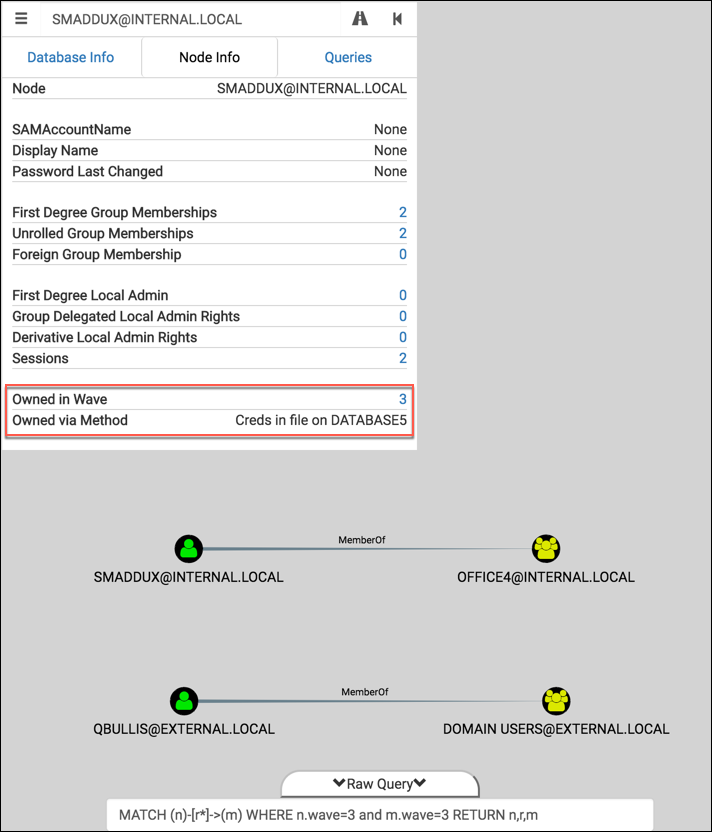 Turns out this wave wasn’t very exciting ¯\_(ツ)_/¯ And we still have to type in our custom query in order to display the graph in BloodHound. Let’s remove that hassle and take it a step further by tweaking the UI and writing some custom queries.

BloodHound added a feature in v1.2 to allow for custom queries (more info on CptJesus’s blog). This has the same effect as adding a pre-built query on the Queries tab, but the configuration file has been decoupled from the project’s source code. I found this file in OS X at ~/Library/Application Support/bloodhound/customqueries.json.

If you’re using the customized BloodHound app, these queries will highlight nodes of interest in the graph as well. Let’s see the custom queries and UI enhancements in context of our example penetration test:

And now click on the “Find all owned Domain Admins” custom query: 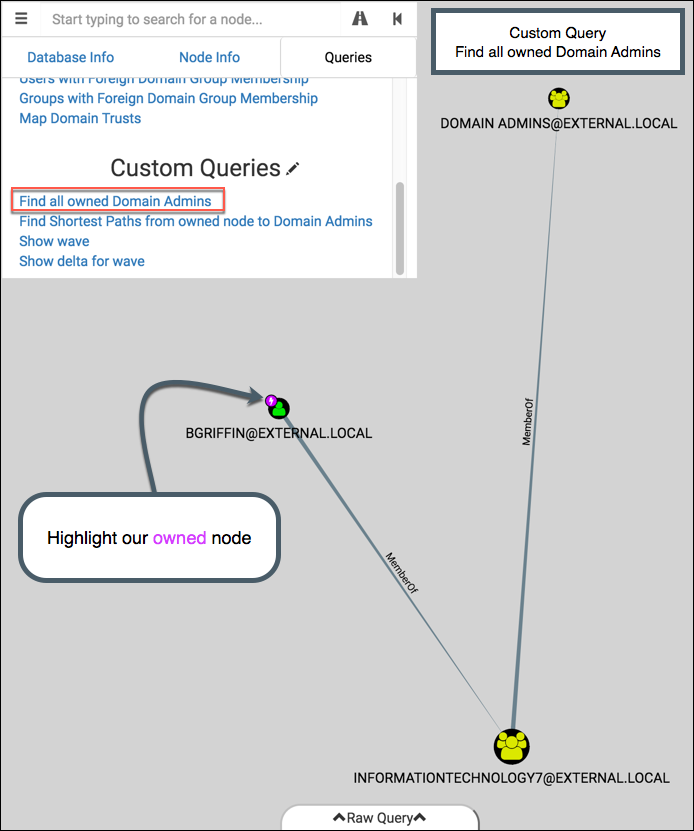 Boom, we got one. Notice that a magenta lightning bolt appears on the top-left of nodes relevant to our custom query. Like the additions to the Node Info tab, this feature is currently only available in the modified version of BloodHound.

This is the same as the “Find Shortest Paths to Domain Admins”, but we’re focusing on nodes we’ve owned. You’ll see in this graph that the two starting nodes, FILESERVER6 and BGRIFFIN, are marked with our owned icon: 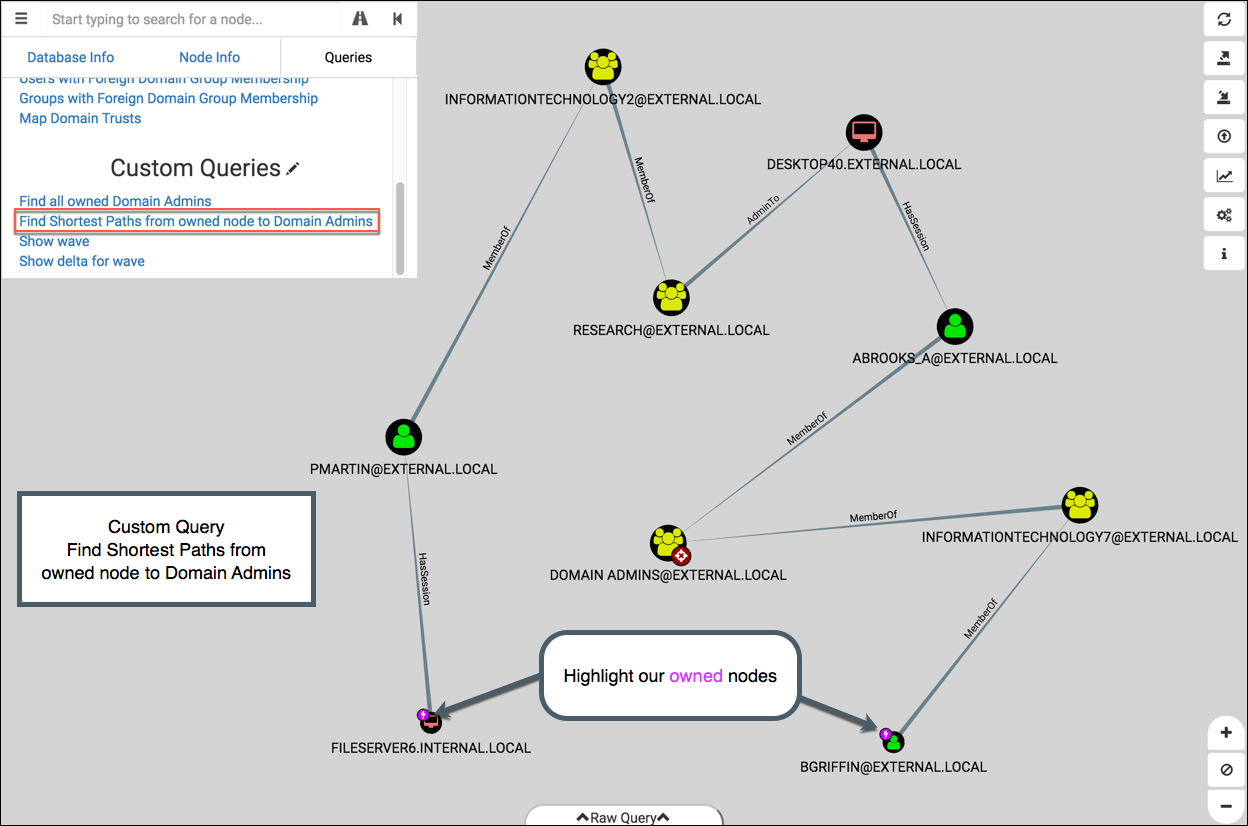 This displays a single, isolated wave. It uses query to present the user with wave values: 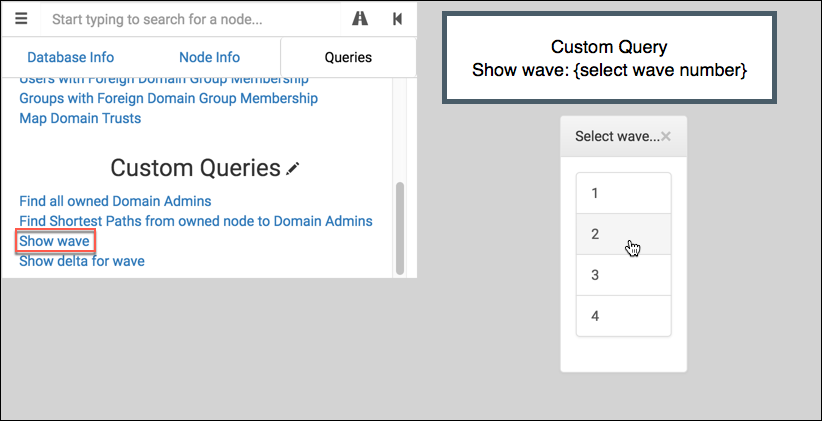 It passes the choice to onFinish to display the result. Here’s wave 2 from our example: 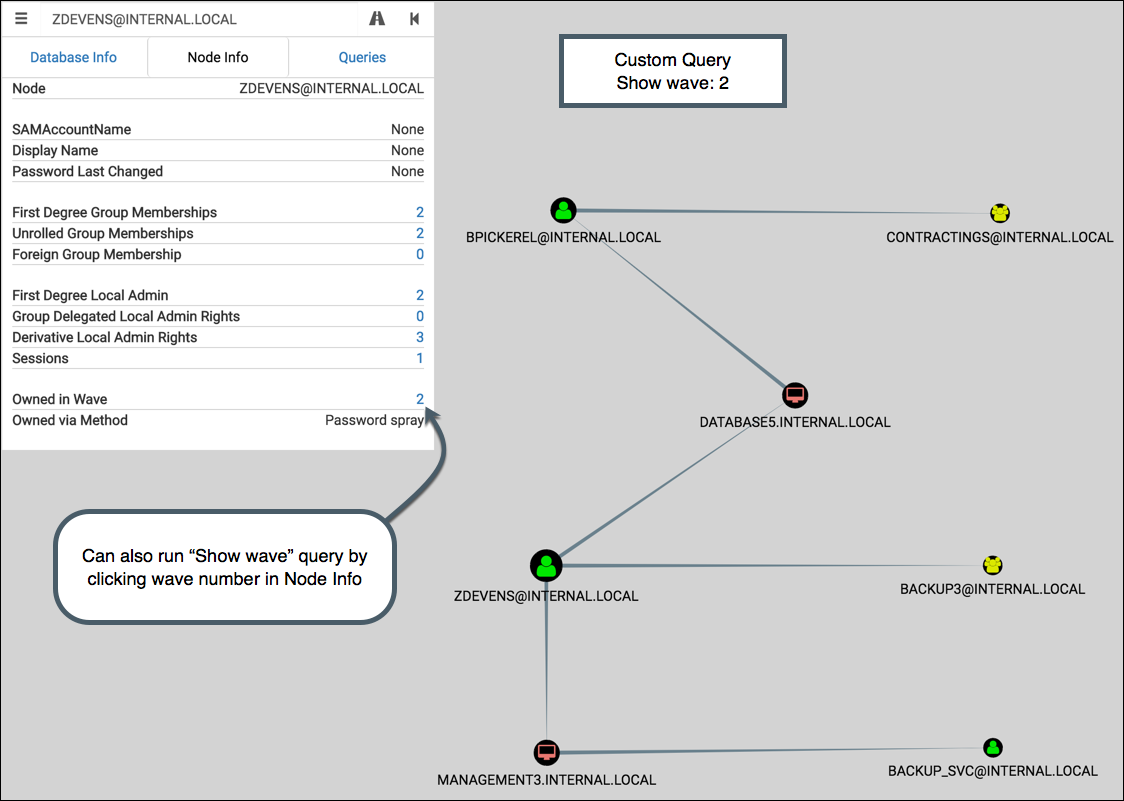 This displays all waves leading up to the selected wave, and then highlights the nodes from that wave. Like ‘Show wave’, it uses the pop-up picker for wave selection.

If wave 2 is selected, the graph shows waves 1 & 2 then highlights the nodes from wave 2: 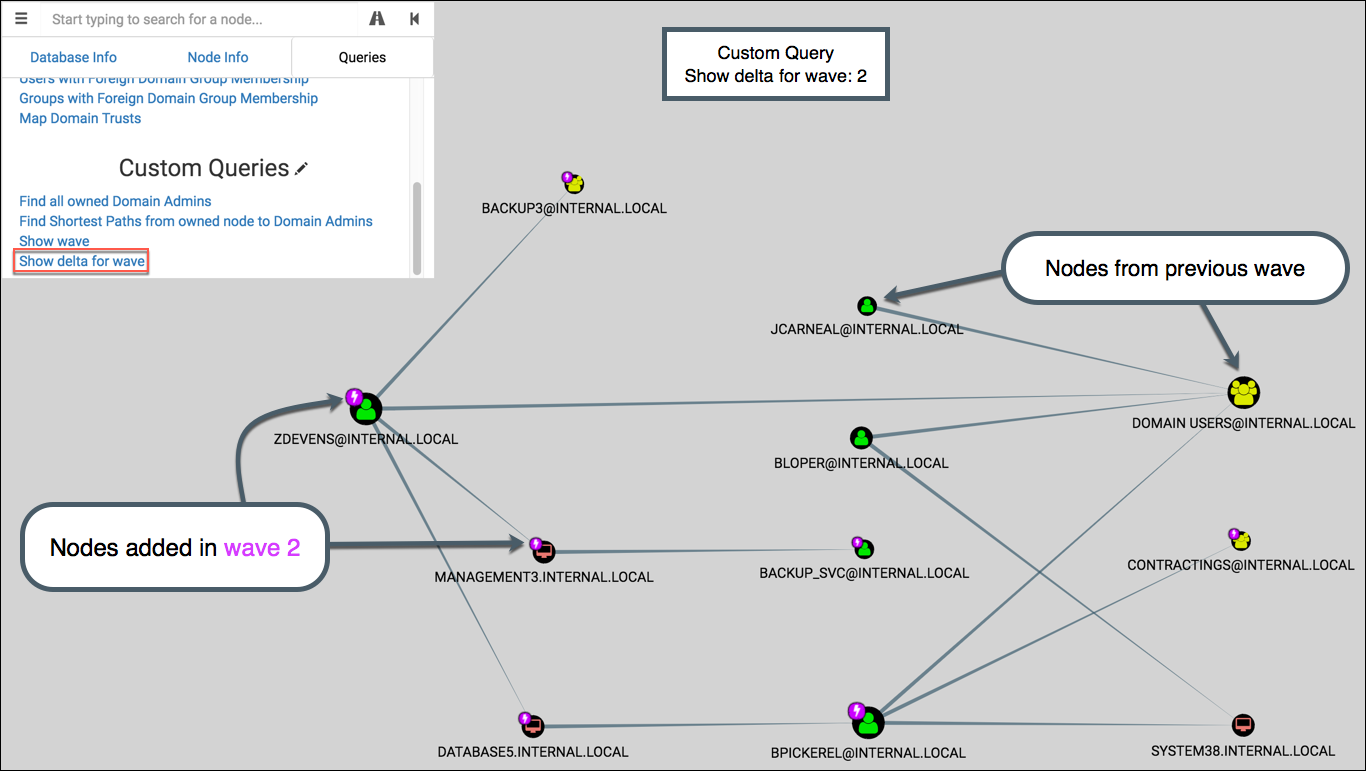 If wave 3 is selected, the graph shows waves 1-3 then highlights the nodes from wave 3: 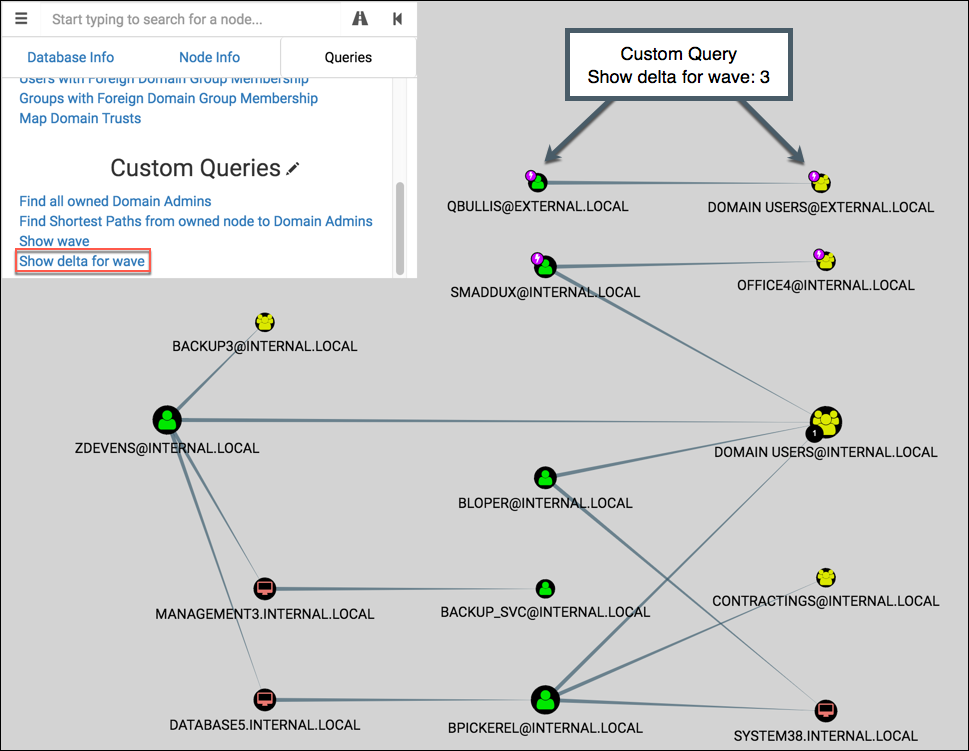 I like this graph for visualizing the changes in privilege gains as it pertains to the greater context of the penetration test. Clients like it too for the same reason – it’s an effective visual aide for explaining the collateral risk of each User or Computer you compromise.

Here’s a couple ideas for taking this a little further. Hopefully I’ll have time to tinker with these in the coming weeks. I’ll post updates here and on Twitter via @porterhau5. Please reach out if you want to explore some of these together! I’d really appreciate some help from those of you who are skilled with front-end development :D