This is another installment in a series of posts regarding modifications to BloodHound and lessons learned while working with Neo4j & Cypher. Other posts can be found here:

This post will cover a new relationship added to the BloodHound Owned extensions: SharesPasswordWith. Check out the GitHub BloodHound-Owned project for the latest code update. Here’s what it looks like in action:

My workflow during a penetration test leverages some non-Active Directory techniques, as I’d imagine most pen testers’ would. One of the first actions I take after compromising a system is to dump the hashes of the local accounts. We often find that those accounts exist on other machines in the environment with the exact same password. It’s a common technique for lateral movement and it’s highly effective. Marina Simakov and Tal Be’ery delivered a great presentation at BlueHat IL 2017 that dives deeper into the risks associated with local accounts. I encourage you to check it out here.

However, lateral movement like this is not something that’s guaranteed to work by just inspecting users and attributes – granted you can get a pretty good idea by comparing PwdLastSet dates. Local accounts aren’t necessarily backed by a centralized configuration overlord like Active Directory, so each machine’s local RID 500 account isn’t guaranteed to have the same password or username. Heck, it’s not even guaranteed to be active. Maybe the admins disabled “Administrator” and created “corp_adm” with RID 1000 as the new local admin. Lucky for us red teamers, many Domain Admins haven’t adopted LAPS yet, so they instead manually set the password for the local admin account (or even worse, use GPP to set it.) And they set that same password on several machines.

Where else do we see commonly see passwords being reused? Users with multiple accounts. For example, Bob may have a normal, everyday account (INTERNAL\bob) and a privileged account for administrator-level tasks (INTERNAL\bob_admin). Or perhaps Bob has an account on two different domains (INTERNAL\bob and EXTERNAL\bob). Bob doesn’t like the hassle of remembering two different passwords, so he sets the same password for each account. That’s a bad Bob.

Abusing password reuse between separate accounts is a useful technique for expanding access across the network, but it’s something that BloodHound didn’t have a representation for quite yet. No fault of BloodHound – its data collection script isn’t designed to test for reused passwords, and that’s a sensible approach given the inherit risks of doing so without human oversight. However this knowledge is valuable information for our attack graph, so I created a means to integrate this into BloodHound via a new relationship.

I’ve added a new relationship in BloodHound to represent password reuse – I call it ‘SharesPasswordWith’. It’s meant to be used as a relationship (or an “edge”) between the following types of nodes:

Adding this relationship for two given nodes via Cypher looks like this:

The use of CREATE UNIQUE guarantees that we don’t create duplicate relationships between nodes, so there’s no harm in attempting to re-add the same relationship multiple times.

The simplest way to add these relationships is by using the -s flag in bh-owned.rb:

The file passed to -s should be newline-delimited with one node name per line. All nodes listed in the file will have a ‘SharesPasswordWith’ relationship created between them, essentially creating a small mesh network of relationships.

For a file containing 4 nodes we’d create a total of P(4,2)=12 relationships (or, “Choose 2 nodes from group of 4 nodes”.) The output below shows the 6 unique pairs of nodes, and our query is creating the relationship in both directions, so we have a total of 12 relationships created. Yay combinatorics:

With the relationships added, we can see how the graph in BloodHound changes with our owned nodes. Here’s the custom query “Find Shortest Paths from owned nodes to Domain Admins”:

You can replicate this by adding the first 3 waves in the example-files directory via -a, and then adding the common-local-admins.txt file via -s.

To supplement this, I also created a Custom Query to highlight all instances of password reuse added to the database – Find Clusters of Password Reuse (source here): 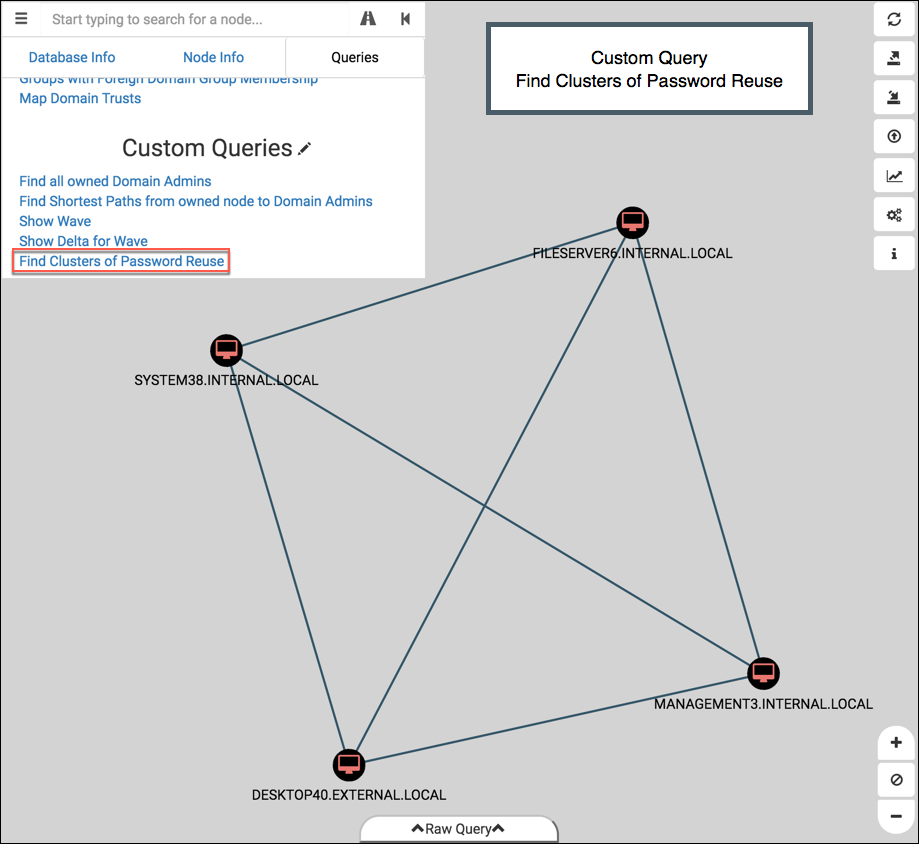 Pretty self-explanatory. The Cypher query used to make this graph looks like:

The graph can become a little hard to interpret when working with a high volume of nodes. I think a future enhancement will be to add a third layout type (joining Directed and Hierarchical) that shows a radial graph output for this query. Doing so will require updating the BloodHound source and learning more about Linkurious and Sigma.

The latest code pushed to the repo contained a couple of smaller additions worth noting.

I’ve focused on the response parsing logic for API requests so that more specific details can be echoed back to the user. For example, here’s what happens when you try to add a node with the name misspelled:

Since an error was found during the property-adding process (the MATCH query returned no matches due to a misspelled name), then it won’t run the follow-up query to find the spread of compromise for that wave. Once the typo is fixed, re-run the command and add the -w flag and the desired wave number:

Getting this granularity of detail in the API response required some Cypher expression hacks (shown here), probably better suited for a different blog post. I plan to write about it next week.

As seen with the above command, the script will now echo back all nodes found in a wave of compromise. Useful for a quick glance at the collateral damage when a node is owned:

We see above that two nodes were marked as owned for wave 2. After finding the spread of compromise, we found 5 additional nodes in the wave.

In the event that you want to remove any custom properties (owned, wave) or any custom relationships (SharesPasswordWith) from the database, you can now use the --reset flag:

Underneath the hood it’s issuing the following Cypher queries:

I’ll post updates here and on Twitter via @porterhau5 as I continue to tinker with ideas. Please reach out if you want to explore some of these together! I’d really appreciate some help from those of you who are skilled with front-end development :D Feedback in any form is always welcome.